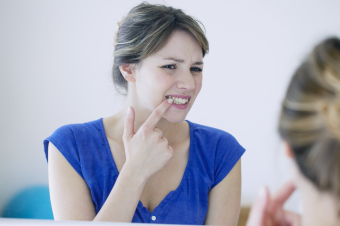 If your gums are bleeding, it is not considered normal.

If you were bleeding from your eyes or arm or some other body part, you would do something about it.  You would call the doctor or at least “google” it!  If your gums are bleeding, it is not considered normal. Even during your dental cleaning, bleeding gums may be cause for concern.

The simplest reason for bleeding gums is by hurting your gums by cutting them with floss or brushing with a toothbrush that is too hard.  This can be reversed by learning the correct techniques for brushing and flossing and by using a soft toothbrush.

Bleeding gums are usually due to inflammation. Your mouth contains millions of bacteria, which need to be disrupted by great oral hygiene every 24 hours.

If bacteria are left undisturbed for too long, your body will try to get rid of them by sending more blood to your gums.  This excess blood may cause redness, swelling, soreness and bleeding.  Your body thinks it has an infection—this is called GINGIVITIS.

This wound won’t heal up until the source of infection is removed.

Bacteria can be found in:

1. Plaque-the soft sticky build-up that adheres to all surfaces in the mouth especially on the tongue, teeth and along the gumline.

2. Tartar/Calculus-the calcified or hardened plaque that can’t be brushed off.  It creates a rough surface for bacteria to adhere to.

3. Pockets - advanced stages of gum disease where bone loss is present and access to bacteria beneath the gums is difficult.

4. Decay/Cavity – a softened cratered area of the tooth that holds lots of bacteria and plaque.

5. Abcess – a collection of bacteria and its by-products trapped within the bone or gums.

6.  Old dental work – all repairs to teeth create a margin or edge that bacteria can adhere to.  Some areas are harder to keep clean than others.  If areas are chipped or broken down they can harbor bacteria.

The infected area may be reversed by simply brushing and flossing.  If bleeding does not disappear within 7-10 days of good oral hygiene or pain is present, please contact your dentist and/or hygienist.   You may simply need your teeth cleaned or filled.

If you are experincing bleeding gums, contact our Calgary dentists to make an oral care plan.